Seeing two people in a happy and healthy relationship regardless of the different ways they grew up in, is what we need to see more of in this world. And this is exactly what YouTuber Karl Rock and his wife Manisha Malik are doing!

Karl Rock first visited India in 2013, and apparently fell in love with the country’s culture and food right then. So much so that he ended up marrying an Indian woman. As his interest in India peaked, he began documenting his travels, and interactions with Indian culture and uploading it on YouTube. You may remember him from this vlog.

Or perhaps this vlog right here.

A lot of his vlogs consist of him leading a life in India, exactly like a native of India would. Going to dhabas, bargaining with vendors, eating iconic Indian food, you get the drift. And TBH, he is doing a wonderful job at it! He has also been travelling to Pakistan and has mentioned on his IG and YouTube how he is learning Urdu currently. His wife Manisha Malik is a constant part of this journey. And, they post super cute pictures with one another.

Manisha is originally from Haryana, and the two met at a mutual friend’s party in Delhi. They apparently hit it off immediately, but when the time came for them to make it official and decide to get married, things got a little difficult due to the racial differences. Not to mention the fact that at the time, Karl was on a tourist visa, so the couple was in a long-distance relationship for one whole year.

But, none of these obstacles deterred either of them, and they finally got married! Though this blessing of theirs didn’t fall into their laps, it required work, especially on the cultural front. In fact, one super cute thing he did to win Manisha’s parents over was touch their feet upon meeting them! But all in all, their story is one of inspiration, hope and true love! It just goes to show if someone wants you, they’ll do their best to work with you to make the relationship happen. You can watch a vlog of theirs together below in case you’re curious. 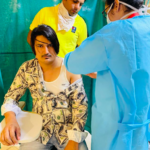