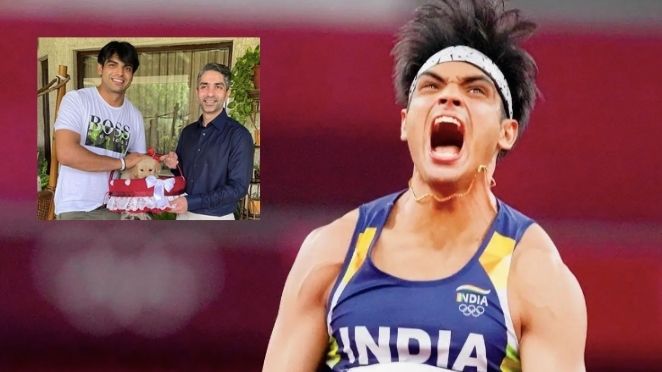 Neeraj joined Bindra in elite company as India’s second individual Olympic gold medalist when he won the javelin final at Tokyo 2020 on August 7.

Tokyo Olympics gold medalist Neeraj Chopra on Wednesday met with Abhinav Bindra and his family in Chandigarh. The javelin star got a puppy named ‘Tokyo’ as a gift from the Beijing Olympics champion shooter.

“Started my time off by spending a wonderful afternoon with @abhinav_bindra sir and his family. Was able to introduce my medal to its elder sibling from Beijing and also enjoyed the warm hospitality of the Bindra family.

“Thank you sir for hosting us and for introducing me to ‘Tokyo’, the newest member of the Chopra family!” Neeraj Chopra wrote on his Instagram handle.

Earlier, Neeraj Chopra had won a gold medal in Asian Games and Commonwealth Games in 2018 and was the current national record holder with an 88.07m throw. He had also won the gold medal in Junior World Championship and set the U-20 World Record with a throw of 86.48m .

This story has been sourced from a third party syndicated feed, agencies. Peddler Media accepts no responsibility or liability for the dependability, trustworthiness, reliability and data of the text. PMN India management/peddlermedia.in reserves the sole right to alter, delete or remove (without notice) the content at its absolute discretion for any reason whatsoever.